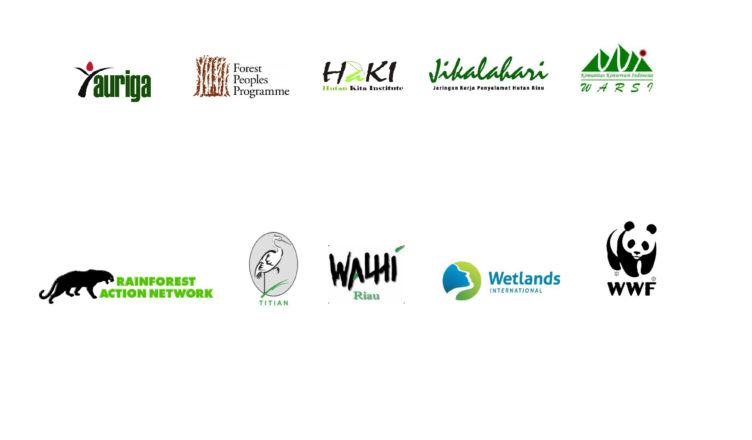 5 February 2018 – On the eve of the fifth anniversary of APP’s Forest Conservation Policy (FCP), the undersigned NGOs highlight five issues that indicate the company is not yet on a sustainable track and progress on its commitments has not been sufficient.

While its FCP commits it to stop sourcing wood from natural forest, Sinar Mas Group (SMG)/APP organized financing and permits to build a massive new pulp mill that potentially increases it’s appetite for wood by up to 84%[i], [ii]. APP’s plantations have never produced that much wood, and NGO projections show that they likely won’t, on a sustainable basis, in the future[iii]. When the wood supply faces a crunch, we fear the company will resume clearing Indonesia’s rainforests and cause further environmental and social impacts. During the five years, SMG/APP has continued to lose conservation areas to deforestation by third parties[iv]. In addition, recent investigation by Associated Press and Straits Times found that PT. Muara Sungai Landak in West Kalimantan, which continued to clear natural forest and develop peat lands in West Kalimantan since 2014, is linked to Sinar Mas Forestry, though APP itself denies any business relationship[v], [vi], [vii], [viii], [ix].

APP claims that it has resolved more than 42 per cent of the conflicts that it has with communities[x]. However, no information on how many of what type of conflicts it has or how many have been resolved, or what kind of resolution process was used has been made public, despite frequent information requests from NGOs. Based on the experience of groups working with communities affected by APP operations in Riau, Jambi and South Sumatra, few of the hundreds of conflicts have been resolved. Of the cases where an agreement has been reached, some issues remain for the quality and implementation of the agreement. Many communities who lost lands, forests and livelihoods to APP’s operations remain unaware that the company has made commitments to respect their rights and to resolve grievances.

3. Lack of progress in restoration and trading of degraded peatlands for areas that may have natural forest and community claims

One year after the FCP announcement, in 2014 APP publicly committed to restore one million hectares of ecosystems in Indonesia – however, there is still no robust plan and clear progress to implement this restoration commitment. APP wood suppliers have caused degradation of a lot of the priority peat restoration areas targeted by the Indonesian government and they are required to stop drainage-based plantations and restore peatlands[xi]. However, APP still has no plan to manage peatlands sustainably, either for economic use without peat drainage[xii] or restoration of natural vegetation, to curb APP’s contribution to climate change and stop peatland subsidence that could lead to flooding[xiii]. The land swap option granted by the government to compensate these companies with areas on mineral soil could lead to more deforestation or community conflicts. APP already controls at least 2.6 million hectares in Indonesia but it may now be able to grab hundreds of thousands of hectares of additional lands without transparency or public review of those areas to determine if they hold natural forest or existing community lands.

4. Misinformation about relationship with wood suppliers and lack of transparency on other key issues related to FCP implementation

Before and after its 2013 FCP announcement, APP has misled stakeholders about the company’s relationship with 27 wood suppliers which account for a majority of its plantation base claiming them as “independent”, by hiding its corporate links with at least 25 of them[xiv]. During the 2015 fires, APP used its “independent” claim to skirt accountability for massive fires in concession areas near its new mill[xv]. In addition to PT. Muara Sungai Landak mentioned above, Associated Press and Straits Times also reported on SMG/APP’s hidden relationship with another company, PT Bangun Rimba Sejahtera in Banka Belitung since 2013[xvi]. Since the FCP announcement, APP had also misled stakeholders about fundamental information for the FCP implementation: OKI mill’s true production capacity, eventually building a much bigger mill without providing any proof of sustainable wood supply[xvii]. APP’s behavior widens its credibility gap with civil society, which has made an effort to work with APP during its FCP implementation.

Since the FCP was launched, there has been no independent verification of progress in its implementation[xviii]. APP has continued to self-declare its unverified progress through its marketing campaigns. While we believe that Forest Stewardship Council (FSC) certification is the best way to get independent and objective verification of a company’s environmental, social and corporate governance performance[xix], this tool cannot be used to verify the performance of SMG/APP companies, affiliates and their wood suppliers because APP was disassociated by FSC in 2007 due to rampant deforestation it had been causing, making it the first among a very small number of the most controversial companies in the world that are disassociated by FSC[xx].