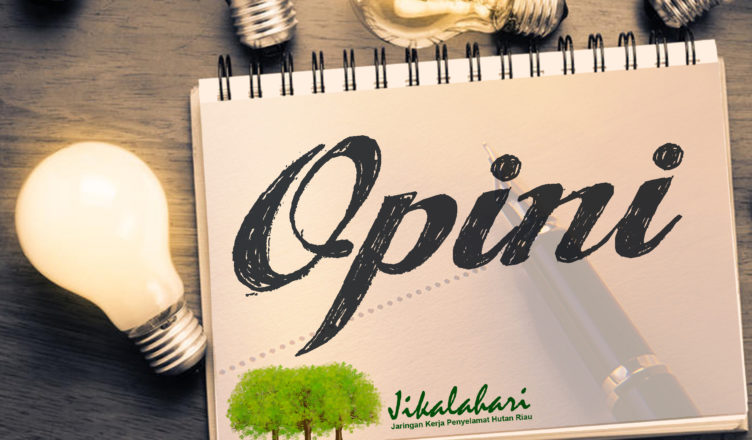 Deforestation is not a local issue. It is complex because politics, economics, and socials aspects drive the existence of deforestation. The impact of deforestation will spread off and become a global issue. Based on the regulation of ministry of forestry of Republic Indonesia No P.30/ Menhut II/2009 about a procedure of emission reduction and deforestation and forest degradation (REDD) clearly revealed that deforestation is a change permanently from forest area to the non-forest area which is caused by human activity.

Dominantly, deforestation is caused by illegal logging and vegetation fires which are used to clear and convert the land into agriculture purposes mainly for palm and oil plantation. As we know, the forest has a vital role in the climate aspect by reducing the emission of greenhouse gases principally carbon dioxide, the primary driver of global warming. However, vegetation fire will bring out carbon emission to the atmosphere which contributes to the global carbon emission around 10-30 percent. As the consequence, deforestation makes the earth getting hotter and leads to the climate change which gives an impact to the whole changes of life. Besides participate directly in the climate change for a long period, burning land and forest also produces pollution which not only threatens one nation but also neighboring counties.

Climate change becomes the biggest problem on earth today. The contribution deforestation and forest degradation to climate change mitigation have highlighted in Intergovernmental Panel on Climate Change (IPCC) Fourth Assessment Report in 2007. Related to the deforestation, data showed that area of deforestation is depicted by the increase in temperature. It is shown by an international team of researchers, led by Clifton Sabajo and Alexander Knohl from the University of Göttingen in Germany, which have published a new study showing that the expansion of oil palm and other cash crops in Sumatera has made the region warmer. Furthermore, the disappearance of forests affects the decreasing ability of the forest to absorb carbon emission. The continuous of deforestation will accelerate the climate change. Eventually, climate change will come easier and faster and it will be the biggest challenge that we face in the future.

Deforestation not only causes climate change mitigation which cannot be seen in the nearly time but also clearly causes a serious impact on socio-economic and health. On the other hand, it also causes the devastating of local biodiversity. The replacement status area of forest become the industrial plantation forest affected the declined of biodiversity and population which become the fear of us.

A research article by Environmental Research Letter Journal in 2012 stated that the highest loss of forest happened at Riau Province that is by 42 percent from 1992 to 2010. The terrible facts of deforestation in Indonesia especially Riau Province are not coming out without any reason. The recent scientific studies show that commercial agriculture and timber enterprises are the principal agents of tropical deforestation. Data WWF (2006) revealed about one-third of total deforestation in Riau is caused by oil palm plantations, while the majority of the remainder is due to pulpwood plantations. Deforestation was largely driven by industrial plantation companies. In 2016, research article named PLOS ONE showed up that a large increase in area planted for oil palm mirrored the increase of Indonesia deforestation.

As we believed before, one of the threats of deforestation is the disappearance habitat of flora and fauna. A recent study showed that deforestation caused the declined habitat of Sumatran tiger and elephant in Riau. In 2008, study analysis by WWF-Indonesia, Remote Sensing Solution GmbH and Hokkaido University published how deforestation and degradation of natural forests in Riau are driving both the death of tigers and elephants and global climate change. Data showed that the disappearance 65 percent of Riau Province forests over the last 25 years showed there was an 84 percent decline in elephant populations, down to only 210 individuals, while tiger populations are estimated to have declined by 70 percent to perhaps just 192 individuals. In addition to the trend of extinction, the loss of their habitat also affected their behaviors which became more aggressive. The destruction of their habitats caused they appeared in resident and plantation area and interfere human activity, data showed.

Deforestation has become a part of Indonesia for many years and has left a long story. To overcome deforestation problem, Indonesia’s government has done many ways such as reinforcing the rules of the plantation industry, protecting flora and fauna, creating conservation area and raising public awareness to save the forests. In spite of the data by the ministry of environmental and forestry that deforestation in Indonesia was declining in 2016 to 2017, deforestation in Indonesia still pay a huge attention and become a terrible issue that should be accomplished very soon.